Male Infertility: See Top Ways You Can Improve Yours

Male Infertility: See Top Ways You Can Improve Yours

There’s a lot of spotlight on the woman when a couple is unable to conceive. However, research has discovered that in all cases of infertility only 30% are as a result of infertility on the part of the woman. Another 30% of such cases stem from male infertility while the rest gets pegged as unexplained infertility.

Male infertility is a lot more common than is let on and sadly, except in cases of erectile dysfunction where the man is unable to have or keep an erection for long, most cases of male infertility come with very little to no visible symptoms.

Getting a woman pregnant is a delicate act that involves a series of processes. First, the testicles have to produce healthy sperms in adequate quantity (above 15 million is considered healthy). Next, these sperms have to be transported to the semen in adequate time and move fast enough (sperm motility) to fertilize the egg released. Any sperm released that is shaped abnormally (morphology) may be unable to penetrate the egg, even if it does get to it.

Related: 8 Early Signs of Pregnancy to Look Out for

Important Facts About Male Infertility You Need to Know

1.Male infertility could be as a result of one or a series of factors, however, in summary, most fertility issues usually arise as a result of sperms that are inadequate in quantity, abnormal in shape, slow in movement or because of a problem with ejaculation.

2.Loss of smell, while seeming like a trivia issue, is usually a pointer to the problem of infertility in a man.

3.Overweight men may have a problem with their fertility and experience fertility issues like poor sperm quality, lower testosterone levels and reduced fertility.

4.Losing body or facial hairs should never be overlooked in men trying to conceive as this may be a sign of infertility.

5.Depression or any kind of stress (physical and emotional) can greatly impair a man’s sexual functions and fertility. Stress has been linked to impotence and erectile dysfunction.

6.Exposing the scrotum to heat (from hot tubs, laptops and saunas) can inhibit sperm production and also reduce the quality of the sperms produced.

7.Smoking is one lifestyle habit that is strongly discouraged in men trying to conceive as it reduces the quality and health of the sperms produced. Research has also discovered that even for men who don’t smoke, exposure to secondary smoke can and does have an effect on male fertility.

8.Research has discovered that men who started smoking at a very young age (before age 11) may go on to have sons with impaired fertility.

9.Varicoceles, where the veins connected to the testis get swollen, is one of the most reversible causes of male infertility.

10.There is such a thing as sperm antibodies where antibodies in the woman mistake the sperms for foreign bodies and attack them, killing them in the process.

11.A man’s body may also develop sperm antibodies that destroy or at best, greatly impairs the natural movement of the sperms. In some cases, these sperms are rendered completely immobile and are unable to advance towards the egg for fertilization.

12.While briefs may be preferable to some men, fertility experts warn against it for men trying to conceive as these produce an unnaturally high temperature, which is harmful to the sperms’ health.

13.It’s been discovered women start to experience declining fertility from age 30 up until they enter menopause in their 50s. Sadly, it’s been discovered that men also experience such a decline. According to Joseph A. Hills, MD, The Fertility Centers, New England, sperm production also start to decline from age 40. However, unlike women that enter menopause and experience a cessation in fertility during menopause, men can still go ahead to father children in later age.

Types of Male Infertility and Their Causes

One or more factors may be the cause of a man unable to father a child. The following are top causes of male infertility to look out for:

Varicocele is a condition where the vein that transport sperms from the testes get enlarged. It accounts for an estimated 40% of all infertility cases in men, but thankfully, is easily reversible.

A man is considered as having a healthy sperm count when he produces over 15 million sperms per one milliliter of semen. Low sperm count are of two types:

Thankfully, low sperm count can be cured using one or a combination of treatment which include, a change in lifestyle, a change in diet and drugs. A potent drug which has been clinically tested to be effective in boosting sperm quality, quantity and motility is Conquer FertilAid for Men. 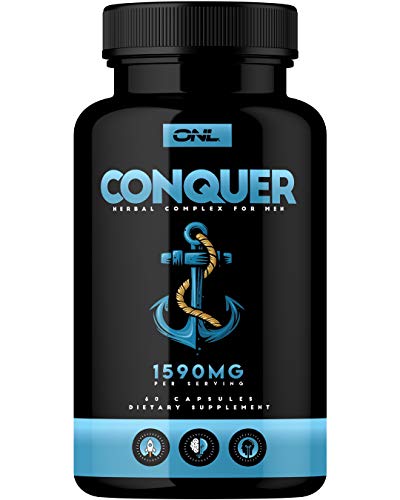 Conquer FertilAid for Men is a natural way to reverse male fertility caused by sperm issues. This drug, made from all-natural and very potent herbs and supplements like ginseng, saw palmetto, zinc, vitamins C and E, selenium, maca, and tribulus have all been proven to bring about the following added health benefits:

During a normal sexual activity, a man produces semen which gets passed through the manhood into the woman. However, when a man is suffering from retrograde ejaculation, the semen released doesn’t come out through the manhood, but goes into the bladder. A number of factors could cause retrograde ejaculation, including injuries to the spine, diabetes, certain medications, surgery done to the bladder or prostate.

STDs, especially left untreated, have been linked to male infertility as these can damage the epididymis and urethra, making it harder for a man to get his partner pregnant.

A normal sperm has an oval head and a long tail. This is what is needed to get a woman pregnant. Abnormal sperms, on the other hand, will have a feature that’s quite different from this. The sperm may present with two heads or more than one tail and this structure is unable to fertilize the egg.

Sperm morphology refers to the number of sperms that should be normal; a range of 4-14% normal shaped sperm is considered healthy and required for pregnancy to take place.

Sperm motility on the other hand, refers to the sperms’ movement towards the egg. Stress and tension can negatively impact sperm motility, making the sperms slow and unable to get to the egg in time for fertilization to take place.

These are cells from the immune system that mistake the sperms for pathogen or other harmful substances and destroy them.

A man may also get born with certain chromosomal abnormalities or disorders like the Klinefelter’s syndrome, where he ends up with two X chromosomes and one Y, resulting in the abnormal development of the male reproductive organ. Other chromosomal defects that impact male fertility include Kartagener’s syndrome, Kallmann’s syndrome, and cystic fibrosis.

Both nonmalignant and malignant tumors like cancer have also been know to impact the reproductive organs in men either directly or indirectly.

Hormonal imbalance is yet another factor that can negatively affect a man’s fertility as it greatly reduces the production of and quality of sperms produced and could be caused by a number of factors, including obesity or smoking

Certain environmental causes may also cause male infertility and these include radiation from cancer treatment, and exposure to heavy metals or industrial chemicals.

These causes of fertility issues are usually very easy to reverse as they typically involve a cessation of the lifestyle habits. These habits include drug use (anabolic steroids, cocaine and marijuana), and excessive drinking as alcohol lowers testosterone production, tobacco use, which reduces sperm quantity and quality

Fertility tests for men usually involves a physical exam and or a semen analysis done to guage a few things, including sperm quality, health and motility, a test that will be carried out by your urologist. Other tests like an STD test to check for new or previously untreated tests as well as a blood work may also be carried out to ascertain the man’s overall sexual health.

Once the cause of the fertility is ascertained, your doctor would usually place you on the corresponding medication or series of medications for your case.

Depending on the cause of infertility, your doctor may prescribe one or more male infertility treatment for you. Treatment available for men with fertility issues include:

This is done in cases where infertility is caused by varicocele to treat the swollen veins or for the reversal of prior vasectomies.

Male infertility treatment may also involve treating any infections, if any to restore your reproductive health and state. The use of antibiotics is employed to clear the system of any such infections.

Hormone treatment could be used in cases of unusually high or less than normal reproductive hormones. These low or high hormone levels are treated with hormone replacement therapy and are readily available to men.

Intracytoplasmic Sperm Injection (ICSI)and Invitro Fertilization (IVF) are assisted reproductive techniques that have cured a few male fertility issues. No longer are men resigned to adopting a child, unless they absolutely want to. Now, men can go ahead to father their own child and success rates in these reproductive techniques are high and continue to remain so.

For male fertility issues brought on by certain lifestyle habits, an adjustment or complete cessation of these habits usually see these problems receding. Male infertility brought about by smoking and excessive alcohol use will be halted and possible reversed when these habits are stopped.

Men who are overweight are strongly advised to lose weight to see improvements in the levels of testosterone production as well as the quality of sperms produced.

Sjogren’s Syndrome Symptoms, Cause, Complications, Diagnosis, Diet and Treatments to Look Out for

Corona Virus (COVID-19) in Nigeria: How to Prevent Coronavirus Plus the Hotlines to Call for Quick Response

0 Corona Virus (COVID-19) in Nigeria: How to Prevent Coronavirus Plus the Hotlines to Call for Quick Response

1 Male Infertility: See Top Ways You Can Improve Yours

0 Pregnancy Health: How To Care For Your Body During Pregnancy